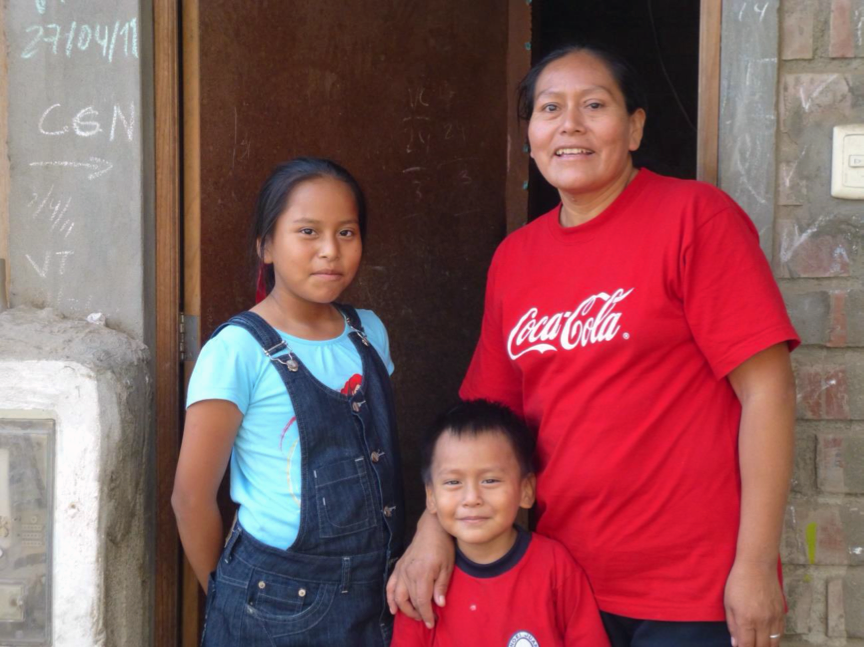 Blind Bartimaeus, the son of Timaeus, sat by the highway begging. And when he heard that Jesus of Nazareth was near, he began to cry out and say, “Jesus, son of David, have mercy on me”…. And they said unto him, “Be of good comfort, rise; He calls you.” And he rose and came to Jesus. And Jesus said to him, “What do you want me to do?” And the blind man said, “Give me sight.” And Jesus said, “Go your way, your faith has made you whole.”

My name is Alicia Hauncho Colina. I am 44, and I have lived in Upper Collique since 1990, back when the area was not so populated. My house is in an area called Hills of Collique. I’m happily married to Marcos Wasabi, and my four children are Obed who is 18, Natalie who is 17 but does not live with us, Nicol who is 8, and Mateito who is 3.

This is a little of Alicia’s story

In 2013, I waited at the door looking downhill for my husband to return from his work as I always did. Suddenly I realized that I could no longer see at a distance and each day my sight was getting worse. Not only could I not see at a distance but I also couldn’t read close-up.

During the Operación San Andrés medical campaign in October 2013, I found out that there was an optometry clinic. I was excited to get an appointment, thinking I only needed glasses. During the consultation I was told that there was both good news and bad news for me. The good news was that I had come in time to be able to consult with a specialist, but that my case was too complicated to resolve at the clinic. They thought I must have suffered a blow because they could see a spot inside the eye. They asked me if someone had hit me, but I said no. They gave me the bad news that if I didn’t consult with a specialist as quickly as possible to treat an advanced cataract I would lose my vision within 5 years.

I left very sad, thinking of my two youngest children, six-year-old Nicol and one-year-old Mateito. What would become of them? I am the one who takes care of them and helps them with their homework. That night my husband saw that I was very sad. I told him what was happening to me. Together we prayed, but in my mind I couldn’t stop thinking that I would completely lose my vision within 5 years. During that time my husband did not have a steady job. Our income was very limited, and I had to work cleaning houses and washing clothes. We didn’t have adequate health insurance.

The next week the Operación San Andrés social worker visited me, and we discussed my case. I went to the Collique Hospital using SIS, the national health insurance. They did pre-surgical exams on my eyes and other tests before sending me to the National Institute of Ophthalmology since my case was so complicated. When I was transferred to this new hospital the doctor who evaluated me said that I also had a tearing of the retina and high blood pressure. They used a laser treatment on the retina.

Alicia is also a leader in her community

For the last eighteen years I have been responsible for preparing and distributing breakfasts in a Christian program called Siloé for 100 children in my area. I had to turn this over to someone else because I had to get to the hospital very early, and because I had to carry heavy buckets of milk and oatmeal. The doctor had forbidden me to carry heavy weight because of the surgery. I also had to resign from my cleaning jobs because I couldn’t travel to the worksites by myself or read the road signs. I also could not help my children with their homework. I felt so sad, but I did not despair because I knew that my family had suffered difficult times before. I gave thanks to God, knowing He is always present at my side. My hands became my eyes, feeling things instead of seeing them, never grumbling.

“Finally, I can see… as though I had been born again"

After the doctor’s meeting it was decided that I would have to use an external contact lens with the correct measurements they would give me. When they put the lens in my eyes for the first time after a full year of darkness, tears fell from my eyes and I saw the doctor’s face and wanted to hug him with joy. When we returned by bus to Collique I could read all the signs and advertisements along the road just like a child who is just learning to read. It was like being born again.

Upon arriving at home I stared at my children’s faces. I held the little face of my 3-year-old Mateito and said, “Child, how many times I’ve looked at you but not seen you.” We hugged and gave thanks to God for what he had done.

When I went to church to give my testimony, I wore my dark glasses, I went forward and could see a brother at the end of the room. I said, “Brother Luis, I can see you,” and everyone gathered around me, hugged me, some with tears in their eyes.

With the help of the Operación San Andrés social worker, I practiced placing the contact lens on my eye following the instructions from the ophthalmologist, and immediately I could see! I also use regular glasses with frames for close-up reading. I like to read and study. Before, my husband was “my eyes.”